This past Saturday I ran the Swedish Alpine Ultra. An amazing day in the mountains to put it mildly!

SAU is a 105km point to point run through the mountains of northern Sweden, there are no aid stations and there isn't even any road access to anywhere on the course apart from the start/end. If you reach the half way mark at Tjäkta pass and decide you aren't really feeling up to it it doesn't really matter because there's no faster route back to civilization than continuing to the finish line. On the one hand this makes it a more daunting task- bailing simply isn't an option, on the other hand this is makes it a surefire way of ensuring you complete the race.

A safety net of sorts is provided by the staffed cabins located every 12-20km along the trail, if a runner is injured or exhausted they can always recuperate in one, or use their sat phone to call for a chopper.

Being my first ever 100+km run, I was hesitant to set myself a time goal, I figured on about 15-16 hours, but decided to bring along enough food for 18-20. Adding to the uncertainty were reports about conditions on the trail itself. On account of a particularly cold spring there is quite a bit of snow up high. One of the winners of last year's race did a recce of the course the day before and reported many km's worth of postholing in rotten snow and multiple creek crossings up to waist deep.

I was strangely unapprehensive at the start line, I think mostly due to the fact that I was going into it not with a racing mindset, but rather simply having a goal of crossing the finish line with a smile on my face. 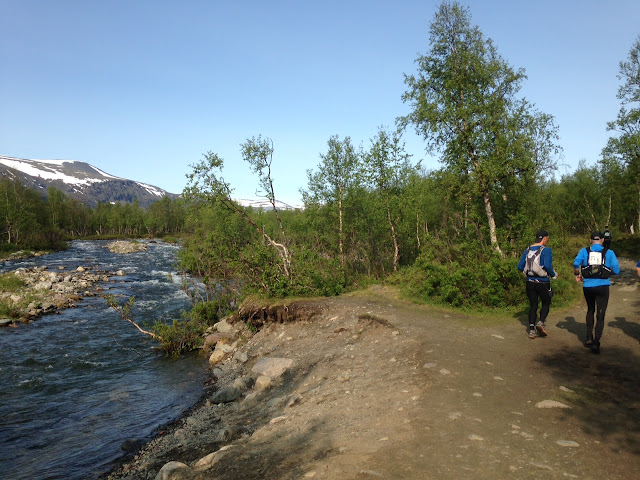 The weather was perfect: sunny with a slight breeze and temperatures of around 12 degrees in Nikkaluokta. The first 19km up to Keb went by smoothly, the trail is really flat in this early section and my legs were fresh enough that the rocky, technical sections were really fun. After a quick pit stop in the Keb fjällstasjon to use the bathroom I was off again towards Singi. This 14km stretch is the most spectacular of the whole run, with awesome views of Tuolpagorni rising above the valley- this peak alone would justify a trip in here on skis during the winter. 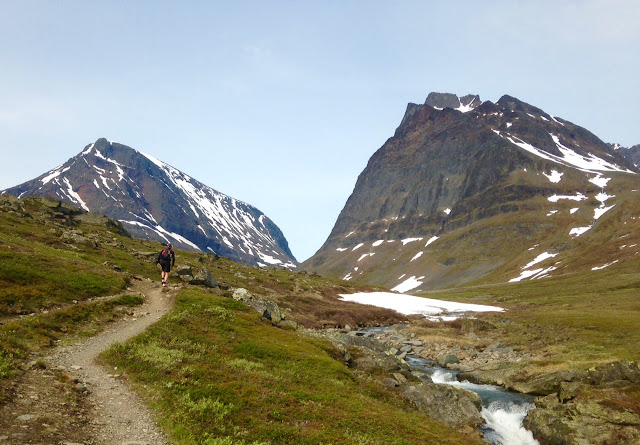 Crossing a marshy area a few kms after Keb spelt the end of dry feet, for the remaining 80kms my shoes remained waterlogged, but I managed to get through without any major blister issues.

By this stage I had settled in to a steady pace and was running with Kjetil from Beisfjord, the only Norwegian in the race. We cruised over the mellow but rocky pass and in to the Tjäkta valley together.

Another 5 minute bathroom stop on account of some stomach troubles and we continued up to Sälka, passing a few runners on the way. Just after Sälka we encountered the first continuous snow bands and having Kjetil as a running partner really paid off, as we were able to help each other scout the best route over the rotten snow with numerous indistinct tracks from early season hikers. The snow coverage wasn't nearly as bad as I had feared, but it was so slushy, with about 20cm of water underneath a foot of snow, that it was tiring both physically and mentally. Our pace slowed necessarily at this point, but when we crossed Tjäkta pass, the high point of the route and also the halfway mark, our energy levels were still pretty good.

The snow continued on for a few more kilometres worth of wet, cold, tiring post holing after the pass, and it was a huge relief to finally reach dry trail conditions again and cruise on towards Alesjaure. We had a 10 minute break here and bought a can of coke from the cabin store and even a small bag of chips before continuing on.


By this stage, a little over 80kms and 10 hours in to the day I was starting to really feel the effort, my calves were feeling pretty hammered and my joints were sore. This section of the trail beside Alisjavri was quite muddy and seemed to stretch on forever. I made sure Kjetil knew not to wait for me, and put some music on to help distract myself from thinking of the remaining 35km, fully conscious of how pointless any negative thoughts were going to be.

Running along, alone in the mountains glowing in the dramatic evening light, listening to Kishi Bashi and Arcade Fire something clicked and I had one of the real high points of the whole day. My pace probably only quickened imperceptibly but it suddenly didn't feel as hard as it had a short while before and for a few miles couldn't wipe the grin off my face. Everything was flowing along nicely and I was revelling in the moment, simply stoked to be where I was and happy that I was still feeling so happy.

On the descent to Abiskojaure, my stoke started wavering as I found it increasingly hard to lift my legs over the rocks on the trail and run with any sort of fluidity or economy. I started feeling clumsy and tired again and opted to swap over to walking for a spell. The final 15km were definitely some of the hardest of the day, my energy levels were at an all time low and taking in food left me feeling nauseous. I plodded on however and interspersed running on the flat, easy sections.


Getting to the finish line in Abisko was a happy moment. In the end I spent 15:07 on the trail, enough for 5th place in a field of about 40 people.

These were my splits to the various cabins (in/out)